It does not matter if you are driving home from work or taking a cross-country tour, extreme weather and poor driving conditions can pop up at any time. Safe drivers should remain constantly vigilant about what is around his or her vehicle so that if action must be taken, it can be done safely. Depending on where you live, it could range from extreme temperatures differences, or baseball-sized hail: the potential to damage the integrity of your windshield lies down every highway and around every turn.

Why is my windshield important?

Think of your windshield as the first layer of protection in your vehicle’s overall safety system against the outside world, hurtling by at 50 mph. You might not think of it as part of the safety system of your car because it seems so natural to be there, protecting you from the high winds and road dust generated from driving. But, would you be able to use your vehicle without a windshield? Besides keeping the wind and dust out of your face when driving, the windshield seals your car against water damage to the interior and keeps out intruders with specially fabricated glass. If you think about your windshield as the lens in which you see out of your car or truck, it really impresses the importance of having a clear and clean view out of your windshield.

What kinds of extreme scenarios most often associate with windshield damage?

Every summer, spanning from May to end of September, an area of the Midwest United States experiences a higher frequency of tornadoes than any other place in the world. This area of the US is known as Tornado Alley. Thought it only covers 15% of the United States, roughly 30% of all tornadoes between 1950 and 20121, have occurred in Tornado Alley, covering North Texas, Oklahoma, Kansas, and Nebraska2. In 2014, there were a total of 823 reported tornadoes in the United States3 and extreme weather damage exceeded $1 billion4. Meteorologist and extreme weather experts have reported that the most dangerous part of a tornado, for you and your car, is not the 110+ mph winds, but what is being tossed through the air at high speeds. The most important thing to remember about tornadoes is to stay out of our car and find shelter as low to the ground as possible and not try to outrun the funnel or debris.

In most cases, tornadoes are accompanied by intense precipitation in the forms of heavy rain, sleet, or hail. Because the winds are whipping around your car at upwards of 130 mph, every pane of auto glass on your car is at risk for damage. Car windows have been known to implode due to the high pressured caused by high winds outside the car and hail the size of baseballs hurling through the air have been the demise of many a car windshield. Larger tornadoes have been seen to pick up and throw debris for hundreds of yards at extremely high speeds.

Get quote + schedule
If you live in an area that is frequently plagued by tornadoes, chips or cracks can be a common occurrence as well as incredibly inconvenient. The integrity of a windshield is substantially reduced if there are chips or cracks in it, which could become a problem in the future if larger debris is pelting your car. Avoid a broken windshield and a full replacement if you have a crack or chip that is smaller than a dollar bill by scheduling auto glass repair service is Safelite. Customers living in areas at high-risk for tornadoes can rest assured that windshield repair will not become a recurring expense: Safelite has the industry’s only nationwide, lifetime warranty and works with most major vehicle insurance companies so that you will pay as little out of pocket as possible.

Another way to potentially damage your windshield is simply driving down the highway. Highway debris can cause drivers to lose control of their vehicles or is thrown behind onto oncoming cars into the windshields, causing cracks, chips or even entire windshield breaks.

Whether you are driving behind a truck shipping loose dirt or rocks, or stuck in traffic, debris that is flung at your windshield can be extremely distracting and surprising, and could lead to an accident or additional damage to your vehicle.  Road debris can take the form of rocks, concrete, dislodged vehicle parts, cargo, and anything that can shake loose from a moving vehicle.

Did you know that you can use your headlights to help avoid getting cracks or chips in your windshield from road debris?

This little trick could help you avoid damage to your windshield when driving at night behind cars and trucks on the highway if anything should break fall off other cars on the road.

This strategy can be used in the daylight as well when driving behind traffic: can I come to a complete stop in 4 seconds at my current speed? Using this sort of strategy can prevent you from being surprised when road debris is launched at your windshield. Avoid a larger accident by driving carefully and watchfully should any damage occur to your windshield.

In 2015, the Northeast United States experienced an unprecedented amount of snowfall. Boston, Massachusetts experienced a record-breaking 110.6 inches of snow5. That much snow measures out to 9 feet and 2 inches of fluffy, snowy precipitation!

The part that became most damaging for Bostonians, their cars, and public transportation system, was that fact that storm-after-storm dumped this snow on the Bay State in just 2 short months. It seemed that once Boston had dug itself out, Mother Nature was bent on burying it again.

It is important to dig out your car in this sort of situation, not only to protect the integrity of your windshield but to avoid the sheer weight of 9 feet of snow on your car.

Some residents’ cars were not so lucky. 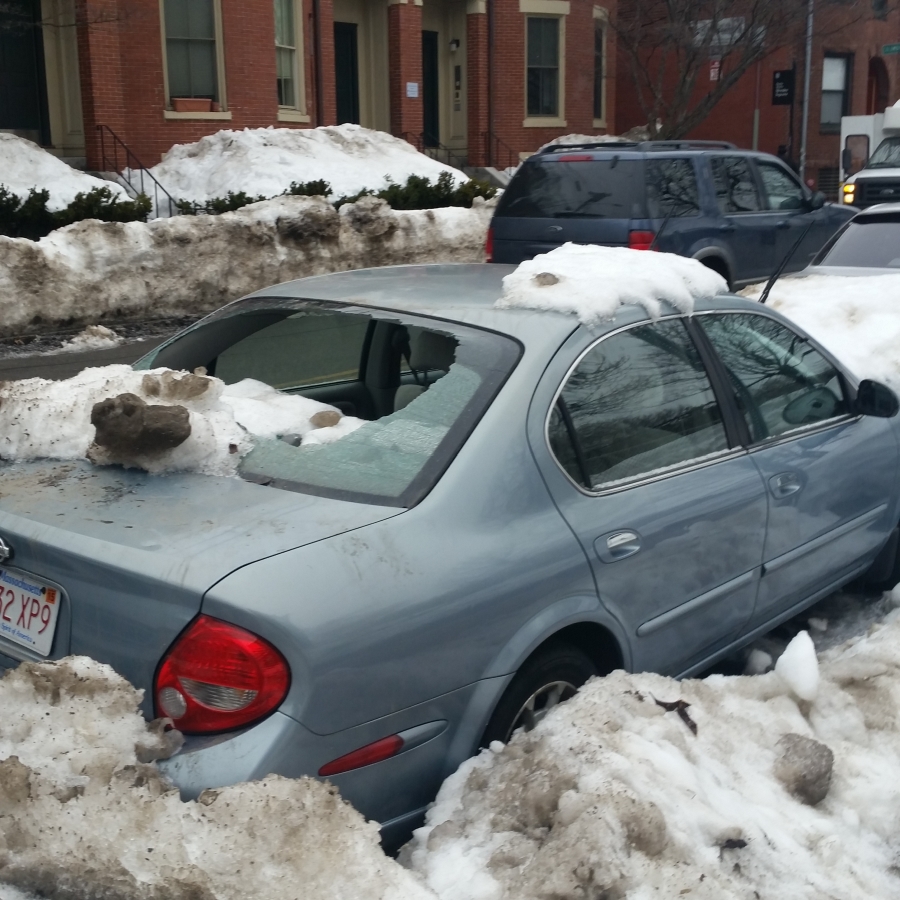 Safelite has the flexibility of coming out to your car with their Mobile Glass Shops, with over 5,000 throughout the country. So if you are unable to get your car into one of our many brick-and-mortar locations, give Safelite a call to schedule service wherever you maybe.