View on map/get directions View or edit your appointment

Visit the Safelite® service center in Tuscaloosa, AL for friendly assistance and expert windshield repair and replacement. All our OEM and OEE replacement windshields come from quality manufacturers and our effective windshield repairs can help prevent the spreading of chips and cracks in just 30 minutes. Our mobile service, where we come to you, means you can fit windshield service into your busy schedule.

Does your windshield have 3 or fewer chips smaller than 6 inches? If so, no need to schedule an appointment. Simply walk in today by 2pm to get your windshield repaired. Learn more.

Enjoy a cup of coffee and watch TV while you wait, or there are some shops and restaurants nearby.

@safelite not only did the safelite guy replace my windows, he cleaned all 4 of my other windows and my rearview....how awesome 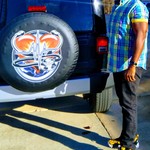 It looks like you are located in Canada, Safelite does not provide service in your country. However Speedy Glass can help you with your vehicle glass needs. Get the same level of expertise and quality near you.